Branson, MO — Digital LunchBox LLC is proud to announce they are the recipients of one Gold ADDY Award and five Silver ADDY Awards. These awards were presented at the 32nd Annual American Advertising Federation Of The Ozarks Award Banquet at University Plaza Convention Center in Springfield, MO on February 5, 2010.

Digital LunchBox has been serving the Springfield/Branson area since 2008 with one singular goal: to help their clients “unleash their awesomeness.” Their full-service team provides the creative concepts, digital HD video production, and 3D animation services to help their clients tell their stories and evolve their brands.

“I can’t think of a better way to kick off our 4th year in business,” says Josh Williams, Director of Creative Development at Digital LunchBox. “Our clients provided us with a platform to freely use our imagination and creativity in producing what I believe are conceptually strong, very compelling sales tools. We are very happy to receive these awards on behalf of our clients.”

Digital LunchBox’s award-winning ads can be viewed online at www.DigitalLunchBox.com. Additionally, they invite area business and marketing professionals to follow their conversations on Facebook, Twitter and LinkedIn. 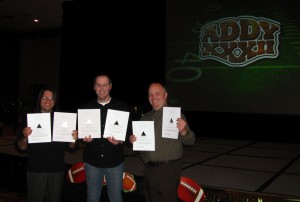