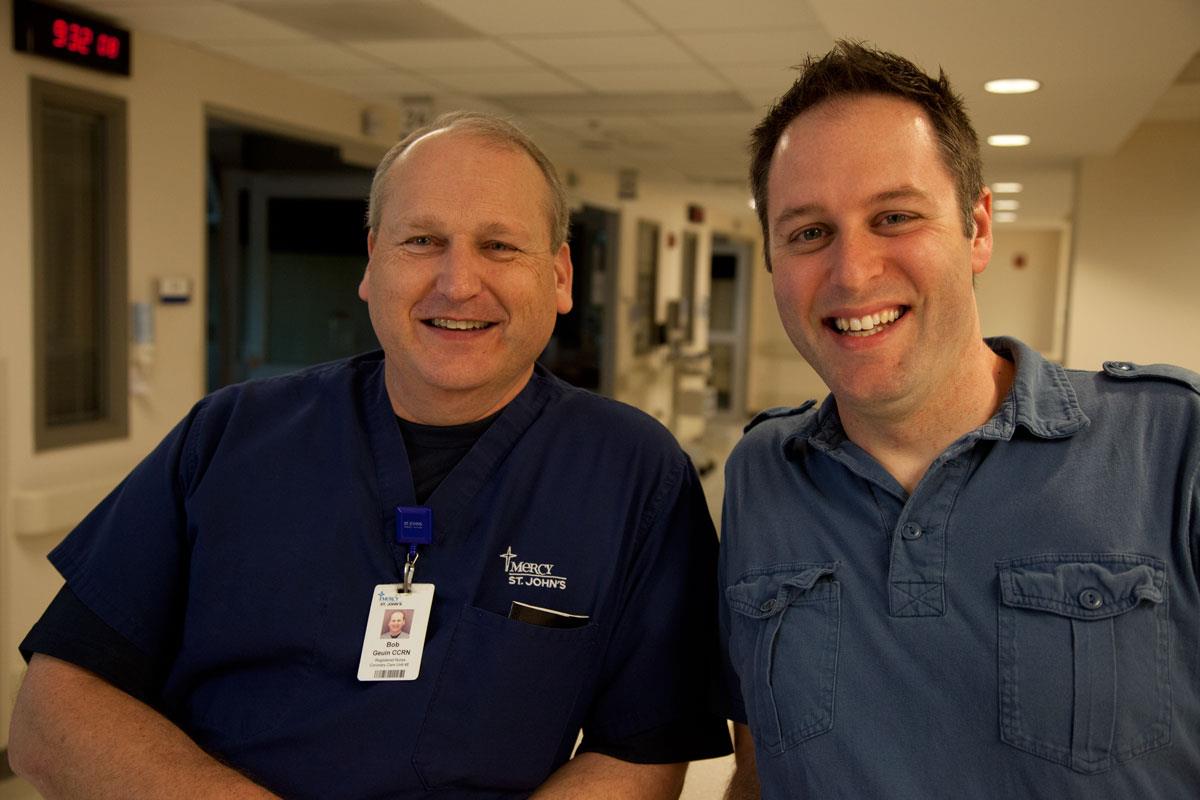 How To Almost Die… and Become Better Because Of It

Home >> Tips, Tricks and Insights for Better Sales and Marketing Videos >> How To Almost Die… and Become Better Because Of It

Five years ago this week, I sat in a hospital bed completely and utterly content to ignore my chosen profession – making videos. This was a weird and beautiful moment in my life that I hope everyone has the opportunity to experience.

Well, let’s back up a bit.  I don’t desire that everyone go through the struggles my wife, family and friends went through.  See, I WAS BASICALLY DEAD.

On April 2, 2010, the day we brought our newborn daughter home from the hospital, the day before Easter, I experienced a sudden cardiac arrest on my living room floor.  I spent the next 6 days in a coma on life support with no measurable brain activity, meanwhile, medical professionals were discussing the prospect of organ donation with my young wife, who of course was dealing with the prospect of becoming the single parent of two little girls. Now I won’t go into detail here on exactly what happened as there is a video that explains what took place (see below). But to summarize, I really shouldn’t be here, yet I really, really am still around. And there is really, really no one else who’s big enough to take the credit for this but God himself. Really.

So back to that hospital bed in 2010.  Let’s make one thing perfectly clear: making videos is not just my profession, it’s my greatest obsession in life. It’s often the reason I get out of bed in the morning. Camera gear is what I’m “Googling” on my smartphone right before I go to bed at night. And to be perfectly honest about it, it’s a bit unhealthy. Obsess much?!

So, here I am, a guy who’s made videos for as his primary occupation for over 12 years, won his fair share of awards, had great business partners (who also made videos, when they weren’t playing foosball or video games) and in this moment none of that mattered to any of us. Priorities shifted, and rightfully so. 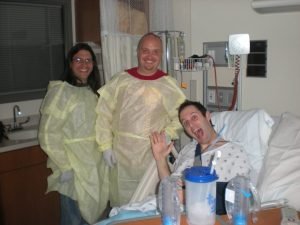 Jesse and Josh visit Jason in the hospital, April 2010. Yes, there are strong meds involved.

I don’t think I had left the hospital before family and friends had started talking about “what a great video” this would make. However, I was a bit reluctant. First of all, I’m a behind-the-scenes sort of guy. At our company, Digital LunchBox, I was the shooter/editor perfectly content to “make cool stuff” in anonymity. I wasn’t the sales guy, the flamboyant producer, or the guy who comes to the ADDY award banquets in a tuxedo to show off in front of peers. Just a “maker” making stories worth telling. It really reminded me of how much I enjoy telling stories, not just making any old video, and that my best work was usually just that – a story.  I came to the realization that, in actuality, MY story wasn’t about me at all.  It was about everyone else, the audience watching it, and a God who chooses to be involved in the affairs of men whether it makes sense to us humans or not, and often shows up to remind us that He’s still around and in charge. So, with a little help from my business partners and my wife, about two years after my incident I began a project called “Day Before Easter” which would become a documentary about my family’s struggles during that time.

I decided to tell this story with unusual tools, in an unconventional way, and in a rather rebellious manner did not care what any of my industry peers thought about it. I shot the video with a DSLR stills camera, despite the colleagues and competitors that thought they were “amateur filmmaker” kids’ toys. I used my dad’s 30 year old Nikon photo lens for my wife’s interviews because it just looked right. To match the fluorescent overhead lighting in the hospital I lit the interviews using CFL bulbs and a Pier One Chinese lantern… CRAZY things I’d never bring on a paying client’s shoot. I rigged up my own “slider dolly” back when the concept was somewhat newfangled. (Like a lightsaber to a Jedi, every video guy should have to make one of these contraptions as a rite of passage.) I was telling a story that was worth telling, and it was a breath of fresh air in my career, and my life.  I haven’t looked back.

In general, I’m supposed to bring glory to God for the grace that I, as an imperfect sinner, don’t deserve.  But occupationally, I still wonder, why the heck is Jason Spencer still here? Is it to merely lug around a camera and make “videos”? Or is it to tell stories worth telling? I think that cuts to the ultimate purpose of this revamped blog at DigitalLunchBox.com.

We’re transitioning our company news feed into something a bit more thought-provoking. There are plenty of tech bloggers out there that opine on cameras and gadgets and software goodies, but it’s what you do with those tools that matter, and how the art/marketing/media you create affects real people. At Digital LunchBox, we’re on a quest to tell better stories, whether it’s for a brand, a worthwhile cause or a person. We’re opening up our playbook to the world, learning out loud and inviting you to come along for the ride.  In the coming weeks (as time allows – we’re really busy right now!) I’ll post my thoughts on what helps tell great visual stories, and show some examples of how it’s been done in the past.

Oh, and about all those awards that were previously so important to me – today most of them are packed in boxes.  In fact, as of this writing, our latest ADDYs are still ingloriously piled amongst the junk on my desk. I should really just GIVE those to my clients…  Ah, priorities! 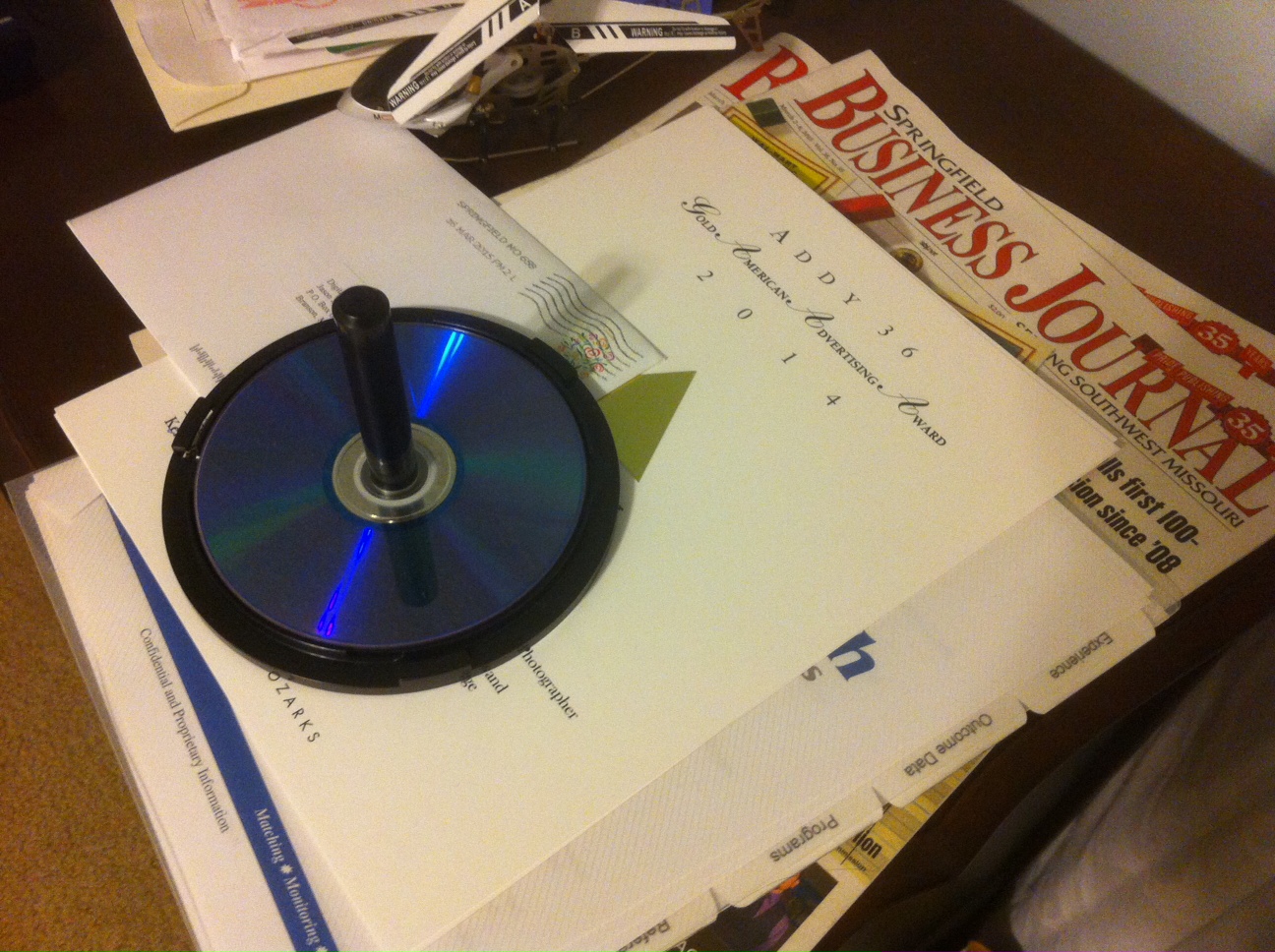