You Don’t Need a 4K Brand Video, But You’ll Want One Anyway – Part One

Home >> Tips, Tricks and Insights for Better Sales and Marketing Videos >> You Don’t Need a 4K Brand Video, But You’ll Want One Anyway – Part One

Considering a 4K video shoot for your next brand video or commercial?  You might not need it.  But then again, you might want it.

So in reading the title to this post I laugh inside a little bit.  As a longtime photographer and a video producer at Digital LunchBox, I live in a weird blender full of old-school storytelling techniques and cutting edge technology.  Lenses and lights.  Pixels and processors.  Every fad that is unleashed upon the industry becomes next year’s big NEED.  Well brace yourselves!  In part one of this article I’m going to take off my storyteller hat for a moment, replace it with my nerdy-technogeek hat and discuss 4K technology.  Then, in part two of this article,  I’m going to put my storyteller hat back on and explain why marketing pros who need videos should actually care about this.

It’s here that you’re starting to lull to sleep… But I promised I wouldn’t bore you with numbers!  I only bring up the resolution of 4K to say that it’s a lot of pixels by a lot of pixels.  Gobs of pixels.  When captured using professional cameras and excellent lenses (variables that affect the quality A LOT) 4K is really sharp and stunning, even on a 1080p HD monitor.

But how sharp is it?  Time for a reality check.

Honestly, how sharp your 4K video is depends on where you’re watching it.  Let’s face it, most people don’t own 4K TVs yet.  In fact, most PC screens don’t resolve 4K resolution yet.  It’s estimated that in 2016, as much as 52% of online video will be consumed on smartphones and other mobile devices, the vast majority of which don’t resolve full HD on their 4-5 inch screens.  Add to it astigmatism, farsightedness and the late-night haze most viewers of cell phone video are usually in… and that paints a bleak picture of video quality in the 21st century. THE SKY IS FALLING!

Okay, perhaps I’m overdoing it a bit.  But if you’re going to shoot 4K in 2016, you better have a good reason.  And yes, you’ll definitely want to shoot 4K.  And I’ll give you three great reasons… in Part Two of this article.  (EDIT – It’s online! Read part 2 here.) 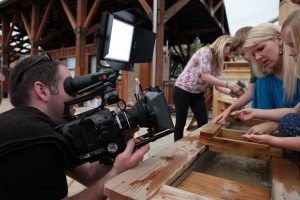 Jason filming in 4K digital with the Sony PXW-FS7 in Branson, Missouri.